Walmart prospects, staff who’re vaccinated will not must put on masks in shops

MLB says Oakland A’s can discover new markets, however the place would they go?

Colonial Pipeline restarts after hack, however provide chain will not return to regular for a couple of days

Turkey will make no concessions in the eastern Mediterranean, President Recep Tayyip Erdogan declared as France announced that it would join naval exercises in the region amid a mounting stand-off over hydrocarbons.

Speaking at the commemorations for an 11th-century battlefield victory by Seljuk Turks over the Byzantine empire, Mr Erdogan warned that Turkey would do “whatever is politically, economically and militarily necessary” to protect its rights.

Turkey “will take whatever it is entitled to” in the Mediterranean and other maritime regions, he said, adding: “Just as we do not covet anyone else’s territory, sovereignty or interests, we will never make concessions on what belongs to us.”

Mr Erdogan took aim at Greece, which along with Cyprus has led calls to impose EU sanctions on Turkey in retaliation for what Athens says is its illegal drilling activities in an area rich with natural gas reserves.

He added: “We want everyone to see that Turkey is no longer a country whose patience, determination, capability and bravery can be tested. If we say we are going to do something, we do it. We will pay the price, whatever it is.”

The Turkish leader’s strong words came as France’s armed forces minister Florence Parly announced that France would join military exercises alongside Greece, Cyprus, Italy and Greece in the eastern Mediterranean, which has become a focal point for broader tensions between Ankara and other regional powers.

Writing on Twitter as she announced that three Rafale fighter jets, a warship and a helicopter would join the drills, Ms Parly said that the Mediterranean should be a place of “stability and respect for international law” rather than “a playground for the ambitions” of certain actors.

The long-simmering conflict over maritime territory and gas rights in the region has been exacerbated by the civil war in Libya. Egypt, the United Arab Emirates and France are among the countries that have backed the opposing side to Turkey in the oil-rich north African nation and have also waded into the eastern Mediterranean dispute.

France, which has been angered by Mr Erdogan’s policies in Syria as well as Libya, has called on the EU to back Greece and Cyprus in their conflict with Turkey over natural gas. 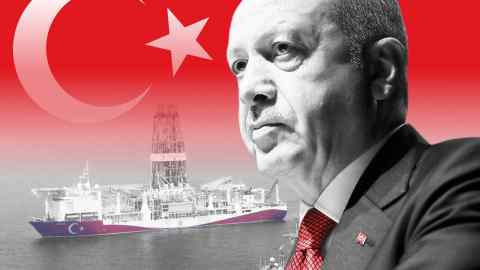 Tensions have mounted in recent weeks after Greece signed a maritime deal with Egypt that angered Turkey, which claimed that it violated the terms of talks that were being spearheaded by the German chancellor Angela Merkel.

Ankara responded by announcing — and then cancelling — a plan to conduct exploration activity in the waters off a Greek island near the Turkish coast. Later, it dispatched the Oruc Reis, a seismic research vessel, into the region along with several warships and warned that the Turkish navy would use force if Greece tried to block its progress.

Sinan Ulgen, chairman of the Istanbul-based think-tank Edam, said that Mr Erdogan’s ultimate aim was to negotiate with Greece.

He said: “His strategy is to use hard power tactics to demonstrate two things. One, that Greece cannot unilaterally impose its own map on Turkey and that Turkey will react to this even with military force. Two, to compel Greece to sit and negotiate with Turkey with a view to finding an equitable partition plan for the east Med.”

But the rising tensions prompted the German foreign minister Heiko Maas to warn on a visit to Athens this week that Greece and Turkey were “playing with fire” and that “any spark, however small, could lead to a disaster”. He added: “No one can have an interest in that, and certainly not in a military confrontation between Nato partners and neighbours.”