Event could be ‘scaled down’ because of Covid-19

The European Commission president has called for sanctions over the brutal post-election crackdown in Belarus as EU foreign ministers prepared for emergency talks on the crisis.

Ursula von der Leyen urged the countermeasures on Friday to show the bloc’s support for the Belarus people’s rights “to fundamental freedoms and democracy” following Sunday’s disputed vote in which strongman president Alexander Lukashenko extended his 26-year rule over the former Soviet state.

The EU, which lifted most of its sanctions in Belarus in 2016, this week threatened new action against people involved in rigging the election or repressing dissent. “We need additional sanctions against those who violated democratic values or abused human rights in #Belarus,” Ms von der Leyen wrote on Twitter. “I am confident today’s EU foreign ministers’ discussion will demonstrate our strong support for the rights of the people in Belarus to fundamental freedoms & democracy.”

Her intervention follows an outcry over the brutal crackdown on protesters following the vote. Many of those detained in Belarus after more than 6,000 arrests since the election were being released on Friday, as reports of beatings and torture prompted strikes at major state-owned enterprises and spurred further protests around the country.

Yuri Karaev, Belarus’s interior minister, said late on Thursday that everyone arrested at the protests would be freed by 6am on Friday. Mr Karaev said in an interview on state television that “as a commander I want to take responsibility myself and apologise humanely” to people who were beaten and arrested but had not taken part in the protest.

Natalia Kochanova, chair of the upper house of parliament, said Mr Lukashenko had “heard the opinion of labourers’ collectives and ordered an inquiry”.

However, the torture claims prompted workers at some state-owned factories — Mr Lukashenko’s political base — to demand new elections. Belarus’s prime minister was on Friday sent to negotiate with striking workers at the Minsk Automobile Plant, one of the country’s largest factories.

In videos circulating on messaging app Telegram, workers could been seen raising their hands en masse when asked if they had voted for opposition candidate Svetlana Tikhanovskaya.

The former teacher, who had drawn large crowds in the run-up to the vote, refused to recognise the election result before fleeing to Lithuania on Tuesday after what her campaign said was pressure from Belarus’s security services.

Ms Tikhanovskaya on Friday called for negotiations over new elections and asked city mayors across the country to organise rallies this weekend.

“Belarusians won’t want to live under the old government ever again. Most people don’t believe [Mr Lukashenko] won,” she said in a message on YouTube. “The government turned people’s peaceful demonstrations on the street into a bloodbath.” 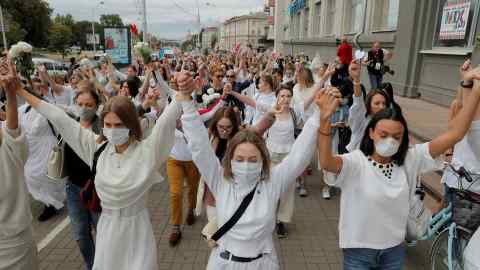 The president was on Friday forced to deny reports that he had been overthrown. “I’m alive, I haven’t gone abroad, as some of our respected ‘insiders’ are trying to spin it,” Mr Lukashenko said on Friday, according to state news agency Belta.

He has accused unknown forces of “disrupting labour collectives” and warned that Belarus would lose export markets for heavy machinery if its factories did not return to work.

Several of those jailed at a notorious detention facility on Okrestina Street in Minsk told the Financial Times that police and guards had repeatedly beaten them with batons, crowded dozens of them into small cells without adequate food and water, refused to let them use a toilet and threatened to rape them.

Yaroslav, a protester who spent several nights in the Okrestina jail, told the FT that guards had shouted, “You wanted regime change and democracy? Here you go!” as they beat detainees. Before releasing them, guards had forced detainees to lie on the ground, beat their arms and legs with batons and then made them do 100 squats. Those who failed to comply were beaten again, he said.

Mr Lukashenko had vowed before the election to “remind” protesters of a massacre in Uzbekistan in 2005 in which police killed hundreds of peaceful demonstrators in the city of Andijan.

State TV had shown showed footage of riot police training to confront protesters, then dragging several young people in handcuffs with obvious bruises and forcing them to promise “not to do a revolution”.